- Set up a promotion booth at HI JAPAN 2022, a health ingredients trade show

- Promoted “Kestose” being prepared as a next-generation functional ingredient 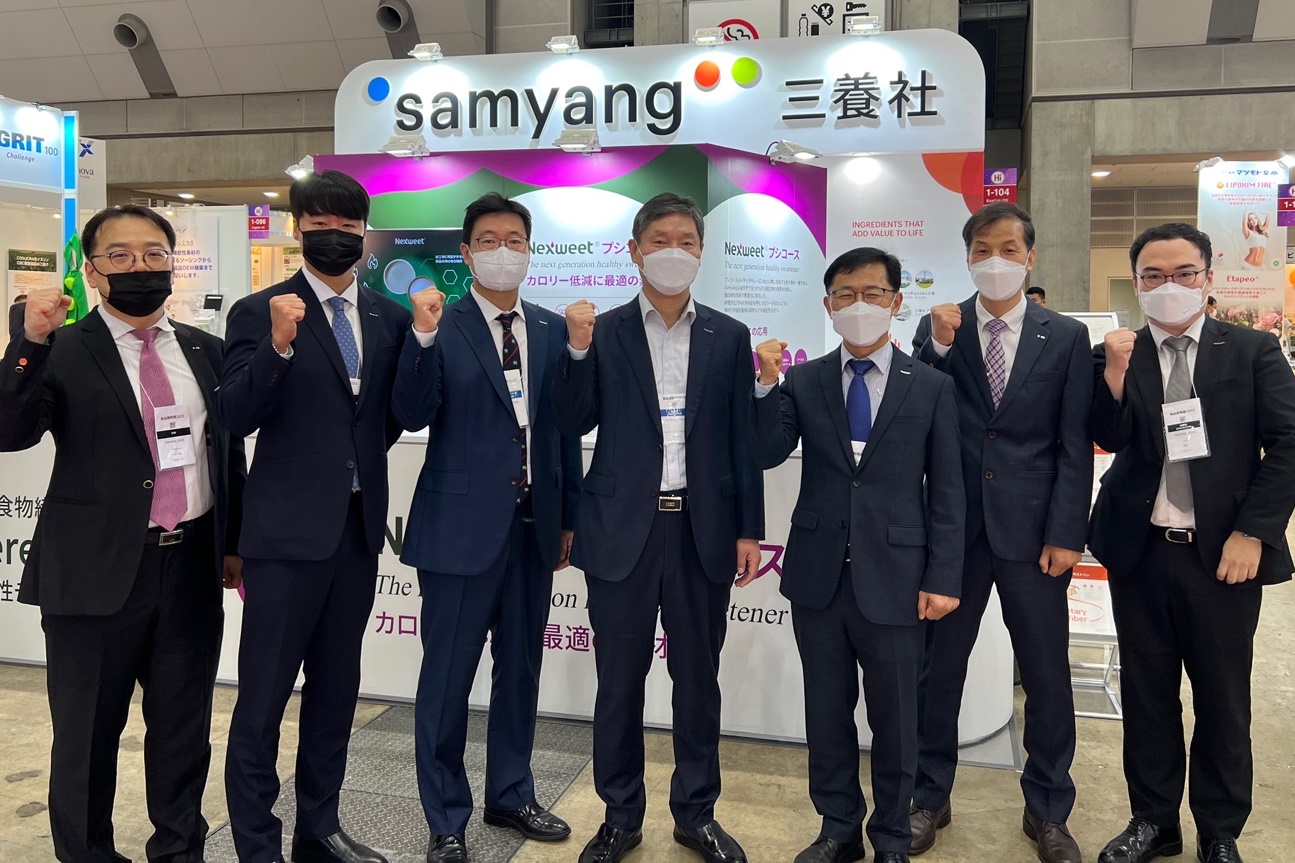 ▲ Choi Nag-hyun (center), Head of Samyang Corp., visited the Samyang promotion booth at HI JAPAN 2022 held at the Tokyo Big Sight in Japan from the 12th to the 14th and thanked Samyang Corp. employees for their hard work.

Samyang Corp. is accelerating its efforts to enter the Japanese functional food market with a focus on specialty (high-functional) ingredients.

On the 17th, Samyang Corp. (Head: Choi Nag-hyun), a food and chemical affiliate of Samyang Group, announced that it had participated in HI (Health Ingredients) JAPAN 2022, a trade show of health functional ingredients and products held in Tokyo, and set up its own specialty ingredient promotion booth.

At the trade show, Samyang Corp. focused on indigestible dextrin, an ingredient that allows functional labeling on general foods.

Indigestible dextrin, a water-soluble dietary fiber, is a functional ingredient that can help with the following bodily functions when ingested: (1) improves bowel regularity (2) supports healthy blood glucose levels, and (3) lowers serum triglyceride level. It can be used in various products such as beverages, confectionery, and baking. Currently, Samyang Corp. is producing powder and liquid indigestible dextrin under the brand “Fiberest.”

Samyang Corp. also committed extensive efforts into the promotion of “Allulose”, which can help reduce sugar consumption. Allulose found in figs and grapes delivers sweetness similar to sucrose, yet its calorie level is “zero,” so it is called the optimal next-generation sweetener. Samyang Corp. recently built a plant exclusively for specialty ingredients in Ulsan to produce crystalline Allulose for easier distribution.

In Japan, which hosted the trade show, functional ingredients have been actively used in the development of various foods such as confectionery, bakery, beverages, and supplementary foods. Japan adopted functional labeling system on general foods in 2015, six years earlier than Korea. Among various functional ingredients, indigestible dextrin is one of the most used ingredients in the Japanese functional food market

In order to effectively promote these key specialty ingredients, Samyang Corp. displayed its raw ingredient samples as well as its various products made with those ingredients, such as beverages, processed sugar products, protein bars, and syrups by category. To deepen visitors’ understanding and draw attention to the booth, Samyang Corp. provided samples for tasting along with informational brochures and leaflets.

Meanwhile, following its participation in HI JAPAN 2022, Samyang Corp. will take part in the SupplySide West (SSW) 2022 held in Las Vegas in November and continue to introduce its specialty ingredients to global markets.

Refusal of collection of email addresses

We hereby refuse any unauthorized collection of e-mail addresses posted on this website using e-mail collection programs or other technical devices. Please note that violations of this will result in criminal penalties under the Information and Communications Network Act.

This site uses cookies. By continuing to browse the site, you agree to the use of cookies.